The next Bishop of Woolwich will be The Rev'd Prebendary Dr Woyin Karowei Dorgu, currently vicar of St John's Upper Holloway in London Diocese. He was born in Nigeria, and will be consecrated on St Patrick's Day (17th March). More details here

The Diocese of Manicland now has a Facebook page. Link here.

Members of the clergy from the dioceses of Zimbabwe, along with clergy from Southwark diocese attended a jointly run course in the Holy Land at the beginning of this month. 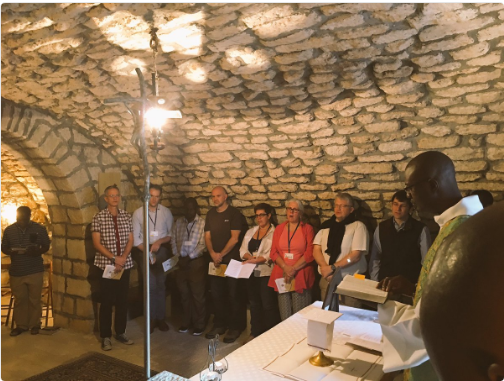 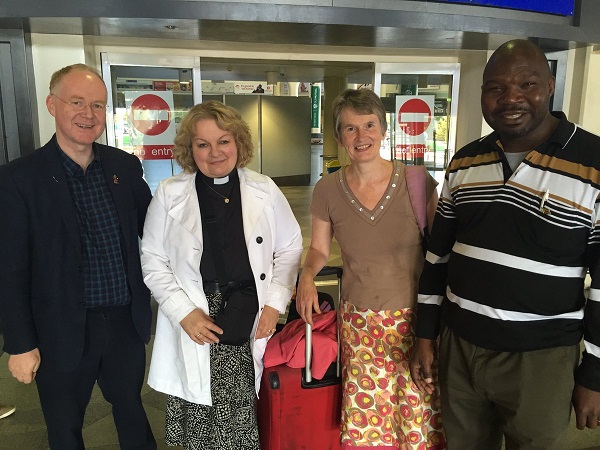 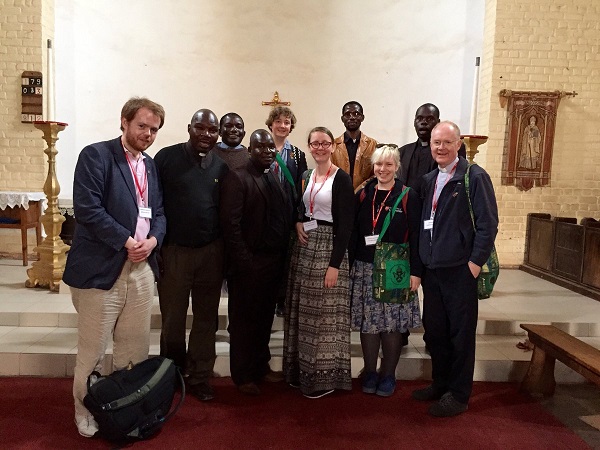 Pastoral Assistants from St John's Deptford are met in Zimbabwe at the beginning of their stay: 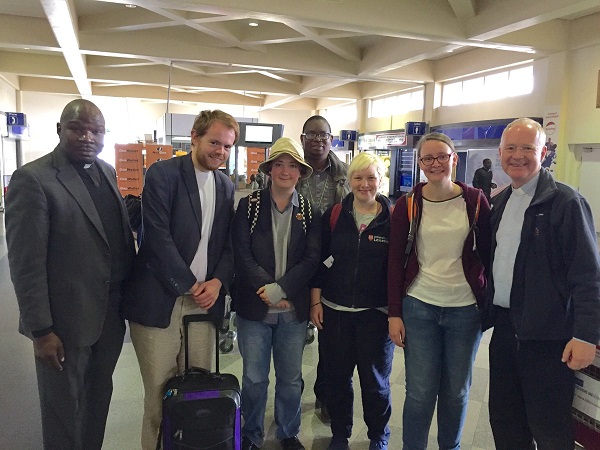 Ahead of a visit by eight folk from Woolwich Area, including four young Pastoral Assistants from the parish of St John's Deptford, two priests from Manicaland were able to join the link group on the evening of Wednesday 15th at St John's, to share in worship and help prepare those going out next month.

Rev'd Shelton from St Bede's Rusape and Rev'd Loveshaw from Holy Cross Manunure had been attending a course for new priests at Canterbury, and it was great to be able to meet and worship with them. 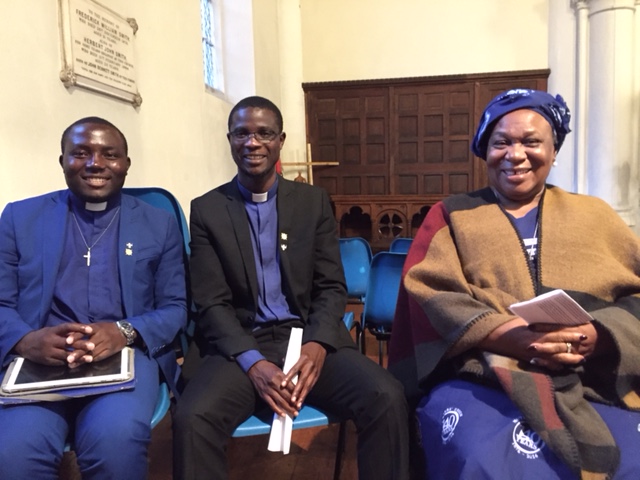 Rev Shelton, Rev Loveshaw and their host for their stay in London, Joanna.

We will be sorry to be losing Bishop Michael in June as he moves on to become Bishop of Lichfield. During his time as Bishop of Woolwich he has done much to strengthen our link with Manicaland, and we wish him all God's blessings for the future. 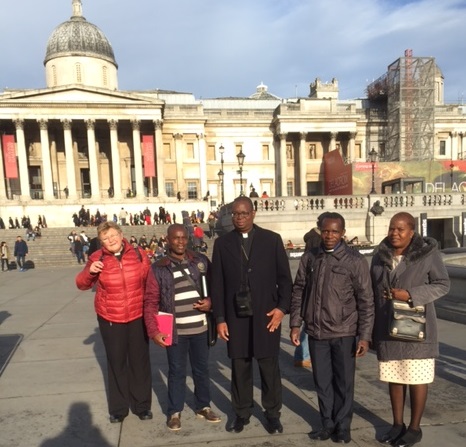 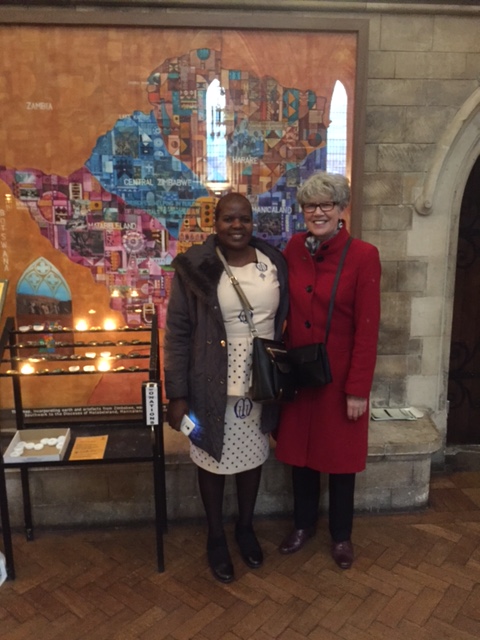 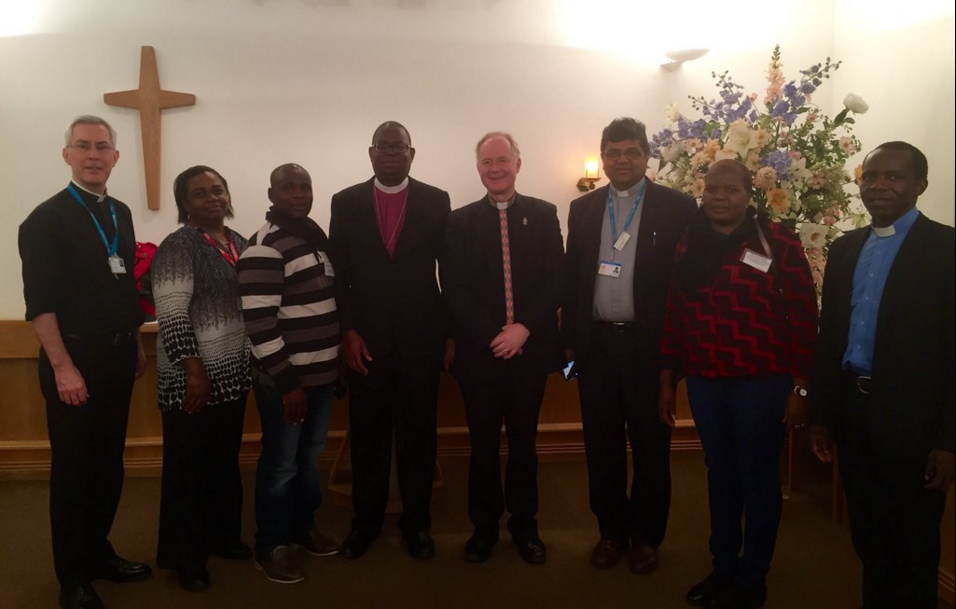 Rev'd Patrick Mabhunu and his wife Priscilla from The Holy Name Sakubva on their recent visit to Southwark Cathedral. 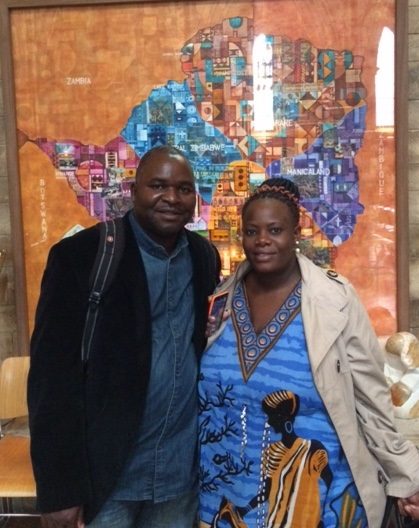 Bishop Christopher of Southwark is touring the dioceses of Zimbabwe this month. Please keep him in your prayers. 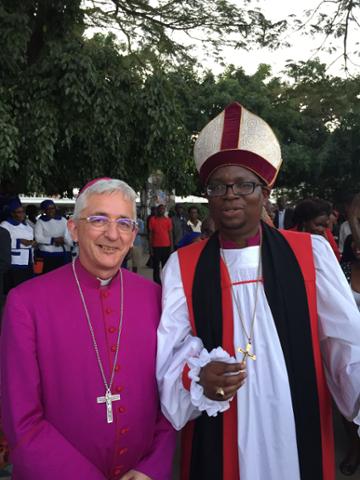 (Picture from Ven Alastair Cutting. More of his pictures of the consecration of Bishop Erick here) 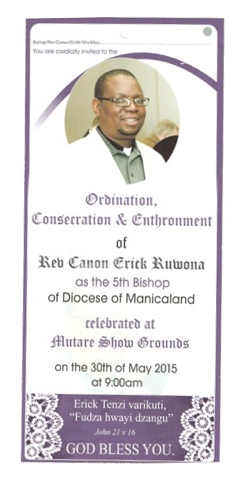 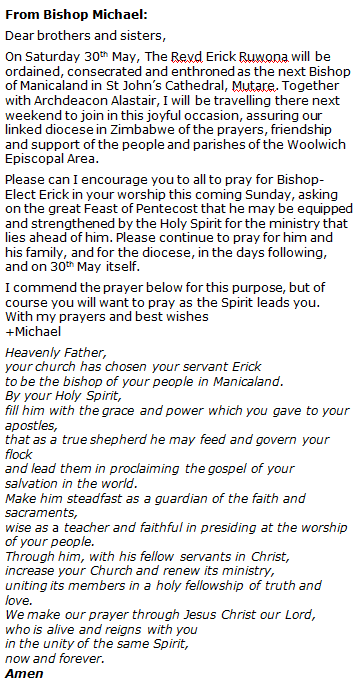 The former Dean of Mutare, the Rev'd Erick Ruwona has been elected to succeed Bishop Julius as Bishop of Manicaland. Please keep Fr Erick in your prayers as he prepares for his consecration.

Following the news of the resignation of Bishop Julius, please keep him and the the people of Manicaland Diocese in your prayers. Pray too for Fr Kingston Nyazika, the Vicar-General who has taken over responsibility of care for the diocese.

The Archdeacon of Lewisham and Greenwich leading a retreat for Manicaland clergy at Nyanga: 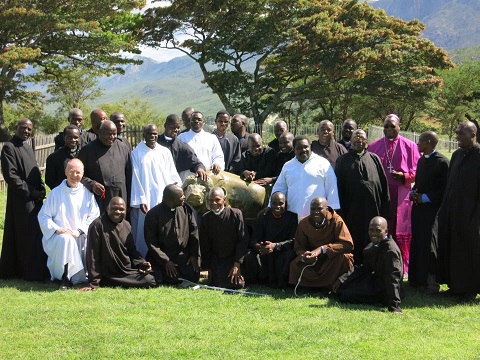 Bishop of Woolwich 1991-1996 and a great friend to Zimbabwean Christians.

May he rest in peace and be raised in glory.

ACT OF PRAYER FOR THE PEOPLE OF ZIMBABWE

On Sunday 28 July Bishop Christopher is inviting all churches in the Diocese of Southwark to make a special act of prayer (in their regular worship or something special) for the people of Zimbabwe prior to the General Election which was surrounded last time by intimidation and much violence. Please pray for them to show our solidarity with them. The Bishop will be joining the congregation in Southwark Cathedral at the end of the 11am Eucharist to say prayers for Zimbabwe and the Zimbabwean people as they elect a new President.

A Tree of Hope for Zimbabwe has been placed in the Cathedral by Action for Southern Africa (ACTSA) and will remain there until after the elections. Visitors can write a prayer or message of hope for the people of Zimbabwe on a paper rose and hang it on the tree. Red roses are used by the women’s movement in Zimbabwe as a symbol of peace.

This prayer may be used:

Pour out your Spirit on the people of Zimbabwe during their elections.

May those who are candidates offer themselves with integrity and out of a desire to serve their neighbours.

May those who vote be granted wisdom and discernment in their decision and freedom in their choice.

And may those who are responsible for the conduct of the process be kept free from interference or harm.

Let righteousness and justice prevail in Zimbabwe and may all people know the peace and healing of your Son, Jesus Christ our Lord.
Amen

Statement about the approaching elections from the heads of Christian denominations in Zimbabwe.

More often we're used to praying for victims of violence in Zimbabwe, but following recent events in Woolwich we are asking our brothers and sisters in Manicaland to pray for our community also, for peace between the many cultures that make up modern Britain.

There is an article in the Southwark Mother's Union Spring newsletter about a sponsored walk in Manicaland organised by the MU. Click here for more information.

We rejoice with our brothers and sisters in Manicaland on hearing the news that the court has confirmed CPCA's ownership and right of access to church property. Please keep our friends in your prayers as they go through the process of reoccupying churches and schools.

Locked no longer? The Cathedral in Mutare: 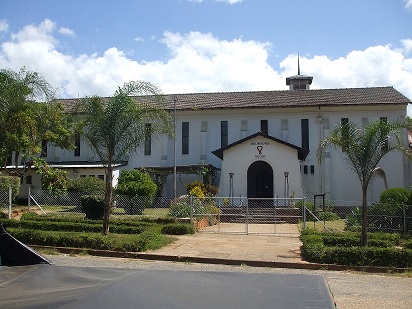 Clergy from Woolwich area, including Bishop Michael visited the diocese of Manicaland. We'll be featuring photographs from the trip on this site over the next few months. 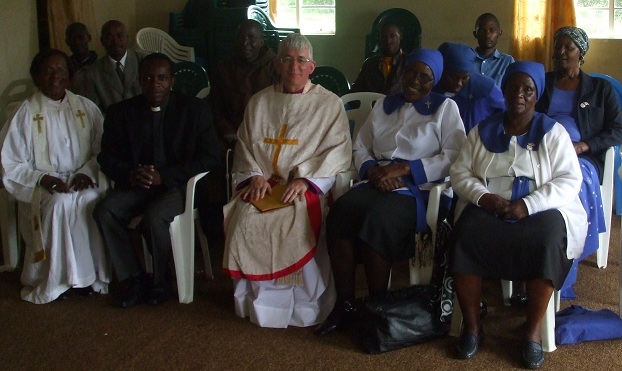 Update for Harare & Manicaland : We've now received news that the courts have found in favour of Harare Diocese as well, and Bishop Chad has offered great thanksgiving to God for the good news.

Please continue to pray for our brothers and sisters as they seek to return to and repair their church properties, and for a peaceable implementation of the court decisions.

Great news from Manicaland!- whilst the courts have reserved judgement in the case of Harare, they have upheld previous court decisions in favour  of the rightful diocese of Manicaland.

Please continue to keep our brothers sisters there in your prayers- in particular that the court decision will be enforced by the authorities. We also need to keep Bishop Chad and the folk of Harare diocese in our prayers as they await further judgements.

On the afternoon of Sunday 21st over 50 people gathered at St Barnabus Eltham to pray for the court decision. We were led in worship by the Bishop of Woolwich, with members of the Mother's Union lifting our hearts in praise. The link chair Steve Cook would like to pass on thanks to all involved, along with those whose prayers were with us even though they were unable to attend.

- Following on  from the Call To Prayer, there will be a service on the 21st October, 3pm at St Barnabas Eltham to which you are warmly invited as we show our solidarity with our brothers and sisters in Zimbabwe.

From  the Diocesan Secretary of Manicaland:

"The long awaited Supreme Court date has been set as 22 October 2012. This is a crucial time for the diocese. We are appealing for your prayers during the  period between now and the week beginning 22/10/12. May you please help us pray for justice to prevail during the hearing and peace after the Supreme Court judgement."

- 18th June is Bernard Mizeki Day. Please keep the people of Zimbabwe in your prayers on this day. 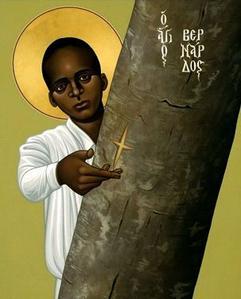 - Please continue to keep the ongoing legal situation in Manicaland in your prayers. The latest from neighbouring Harare diocese, which is in a similar situation with the deposed Nolbert Kuonoga still in possession of church property, is that the courts continue to side with him, depriving the majority of Anglicans in that diocese from access to their churches and schools. 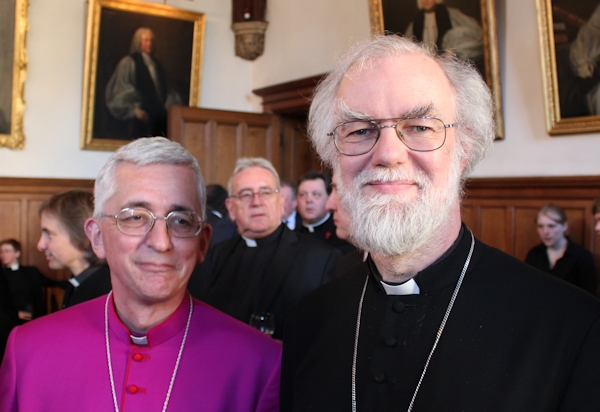 - The Bishop of Southwark's 2012 Lent Call has been given to the diocese, and includes support for several good causes in Zimbabwe. Click here for more information. 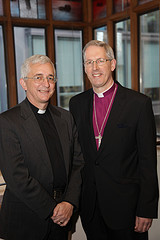 Bishop of Southwark speaks out in support of Manicaland and Harare dioceses : Click here to view 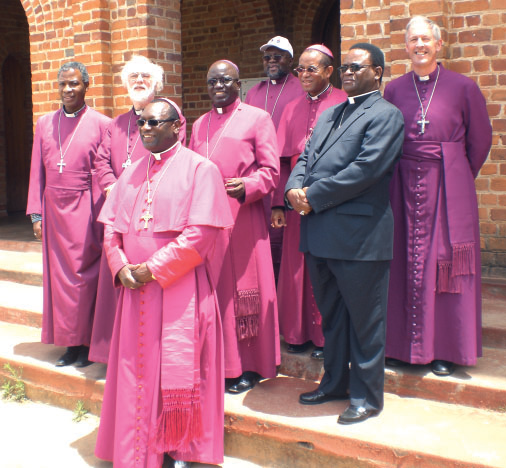 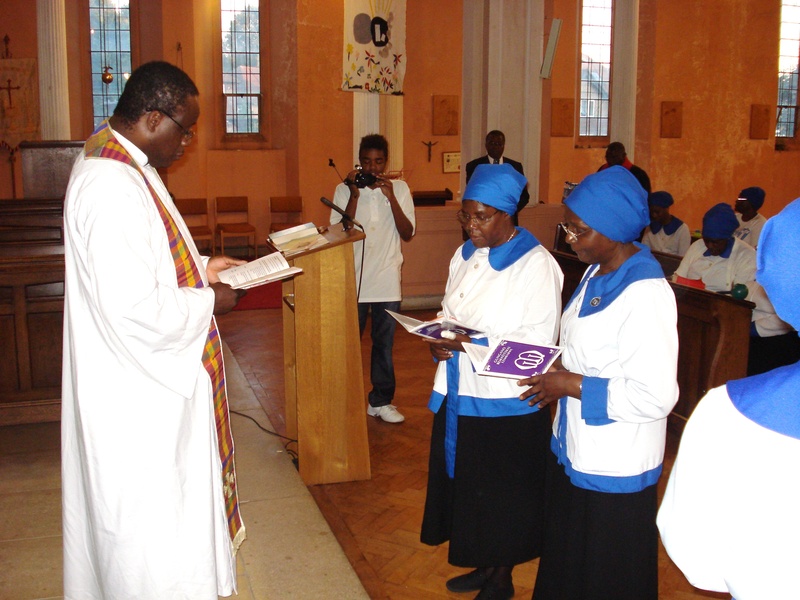 For more photos click on the 'Photo Gallery' option above.

Bishop Christopher on his January trip to Zimbabwe:  http://southwark.anglican.org/resources/bishops-letter 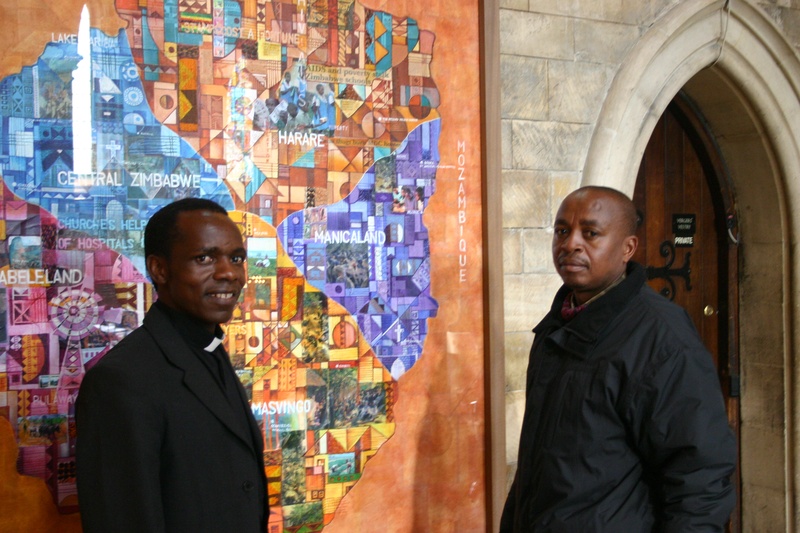 Fr Luke Chigwanda (Manicaland Diocesan Secretary) and Mr Lazarus Nyatsanza, (Director of the Board of Education in Manicaland) visited the diocese of Southwark. Their trip included attending diocesan Synod and a tour of schools in the Woolwich Episcopal Area.

The Anglican diocese of Manicaland in Zimbabwe, and the Woolwich Episcopal Area of the diocese of Southwark support one another in prayer and Christian generosity.

This site exists to support that link.

The diocese of Manicaland covers the area shaded in green below. 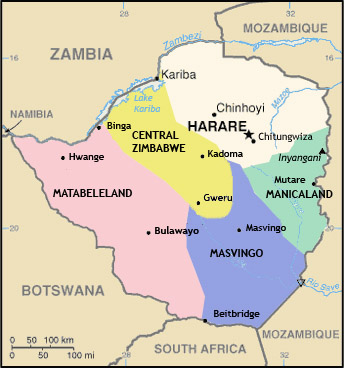